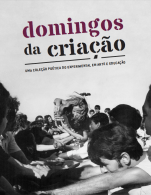 Art, education, playground, party, and protest, all of this and none of it, the vibrant 1971 participatory happenings Domingos da Criação (Creation Sundays) took place at the height of Brazil’s military dictatorship (1964 –1985) amidst the radical shifts in art and culture of the 1960s and 1970s. Organized by critic and curator Frederico Morais at the Museum of Modern Art of Rio de Janeiro (MAM), while he was coordinator of the museum’s courses, Domingos were “experimental exercises of freedom” as tour de force art critic Mário Pedrosa described the experimental art practices of the time.

The six happenings that comprised Domingos – Domingo de papel [Paper Sunday], Domingo por um fio [Sunday by a Thread], O tecido do domingo [The fabric of Sunday], Domingo terra a terra [Earth to Earth Sunday], O som de domingo [The Sound of Sunday] and Domingo corpo a corpo [Body to Body Sunday] - involved now well known artists such as Antonio Manuel and Carlos Vergara, as well as many others working in various creative modalities at the time such as theater director Amir Haddad and the dancers / choreographers Klauss and Angel Vianna. The materials used were donated by industries and made available to the public to freely exercise their creativity together with artists in open-ended and horizontal proposals. The events attracted thousands of people and appeared regularly in newspaper columns and frontpages of the time period. However, there is little available research or critical publications on the history of the famous Sundays.

Awarded with an Itaú Rumos 2015-2016 grant and launched at the end of 2017, the book Domingos da Criação: uma coleção poética do experimental em arte e educação [Creation Sundays: A Poetic Collection of the Experimental in Art and Education], developed in collaboration with Frederico Morais, aims to recover and examine this vital history. The idea of a "poetic collection" comes from Morais’s research on MAM’s publics in the early 1970s, revealing that for many people there is a "poetic collection" suggesting other ways of understanding museums beyond exhibitions or collections of objects, a concept that embraces a collection of personal histories, memories and affections, a poetic space-time that also recalls place and situation of: "silence, noise, breeze, stone, vegetation."1

Currently only available in Portuguese the 304 page book is conceived as a book-archive comprising: more than 100 black and white photos of Domingos, selections of Morais's articles and other journalism of the time period, interviews with artists and collaborators who participated in the events, MAM’s courses and the experimental spirit of the time period (Amir Haddad, Angel Vianna, Anna Bella Geiger, Antonio Manuel, Carlos Vergara, Cildo Meireles and Luiz Alphonsus) along with critical essays by Morais, editor Jessica Gogan and an afterword by writer and critic Frederico Coelho. The book seeks to generate a platform for memory and reflection on the Sundays and expanded possibilities of art and education in contemporary contexts.

Take a look at the promotional PDF

* The book is only being sent to addresses in Brazil.