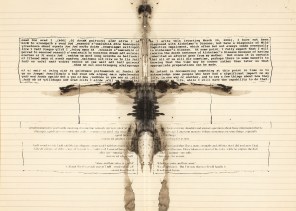 From April 27 - July 18, 2010, The Andy Warhol Museum presented the exhibition José Rufino: Blots & Figments as the culmination of the artist’s residency in Pittsburgh (USA) and his collaboration with the University of Pittsburgh Alzheimer Disease Research Center (ADRC). Drawing on Rufino’s use of the Rorschach inkblot in his work and on a lesser known series of Warhol paintings also influenced by the famous blots, the exhibition brought together over 60 new works questioning memory, perception and loss. A vital highlight of Rufino’s residency included a radical expansion of his artistic investigations on memory via an exploration of the mental breakdown associated with Alzheimer’s disease – creating a series of works in collaboration with researchers, patients and caretakers from the University of Pittsburgh Alzheimer Disease Research Center.

Rufino also evoked the presence and memory of Warhol and the city of Pittsburgh through monotypes created on original historical documents, including newspapers from the time Warhol lived in the city, notebooks from Schenley High School, the school Warhol attended, photographs he used for the Electric Chair and Skull series, and even colored papers leftover from Warhol’s studio. The project was developed in collaboration with Instituto MESA and is featured in the 1st issue of MESA magazine.